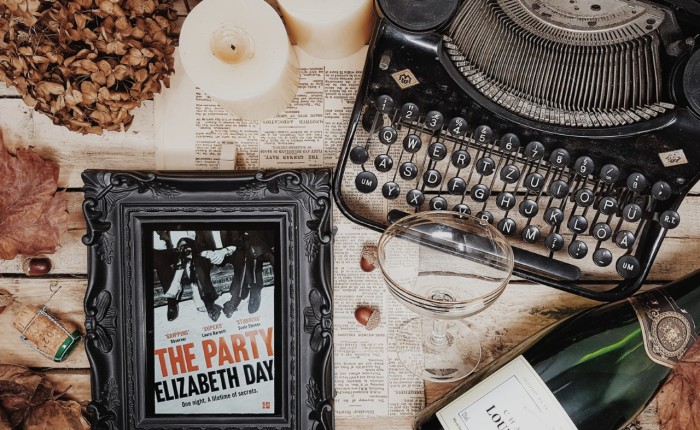 Hello readers!  For today’s blog post, I will be reviewing The Party by Elizabeth Day, but before we delve into what I thought, lets start with that all important blurb: 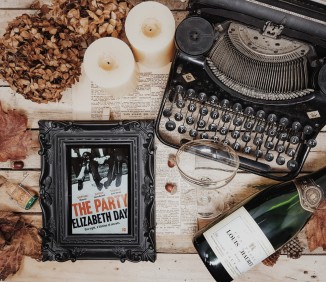 Martin Gilmour is an outsider. When he wins a scholarship to Burtonbury School, he doesn’t wear the right clothes or speak with the right kind of accent. But then he meets the dazzling, popular and wealthy Ben Fitzmaurice, and gains admission to an exclusive world. Soon Martin is enjoying tennis parties and Easter egg hunts at the Fitzmaurice family’s estate, as Ben becomes the brother he never had.

But Martin has a secret. He knows something about Ben, something he will never tell. It is a secret that will bind the two of them together for the best part of 25 years.

At Ben’s 40th birthday party, the great and the good of British society are gathering to celebrate in a haze of champagne, drugs and glamour. Amid the hundreds of guests – the politicians, the celebrities, the old-money and newly rich – Martin once again feels that disturbing pang of not-quite belonging. His wife, Lucy, has her reservations too. There is disquiet in the air. But Ben wouldn’t do anything to damage their friendship.  Would he?

Told from the perspective of Martin and his wife Lucy, this book moves back and forth through time, between Martin’s Police interview regarding some unknown dramatic incident at the party in question, and the past where we see how Martin’s relationships were formed.  It’s a very suspenseful method of writing, and I found myself eager to read the next chapter and the next, to finally discover exactly what happened at the party and what it will mean for the main characters.  This is definitely a slow burner, but I found it worth the wait.

At its core, this book is about relationships and the importance we put on them.  Martin strategically wedges himself into the life of his ‘best friend’ Ben and his elite family, as a means of bettering himself and his life, importance and status by proxy, but more than that, Martin finds himself drawn both sexually and emotionally to Ben as he struggles to accept his own homosexuality.  Then there is the cold and loveless relationship he shares with his Mother, one which profoundly shapes who Martin is and the absent relationship of his deceased father, unknown but always felt.  Lastly, there is the relationship with his wife Lucy.  To call their courtship romantic would be the biggest overstatement of the century, with both characters essentially settling, seemingly content to simply find someone who respects them and who will be there.  Lucy’s chapters are the most insightful of the book, as unlike Martin, she is capable of a huge amount of emotional intelligence and of seeing things from the perspectives of others.  She brings a level of humanity to Martin which is much needed, because to put it frankly, he comes across as a needy personality vacuum without Lucy’s observations.

It is also a criticism on the class system and of the power and influence that money and titles still hold over society today.  Ben is the epitome of the white, privileged, upper class Eton boys which seem to flood the chambers of Westminster to this day.  He is able to charm and win over anyone, he is liked by all, but at his core he has nothing behind that smile without his family’s wealth to back him up.  The party itself is filled with the typical Notting Hill set of trendy ‘it’ people and influencers, politicians and rich vacuous people whose sense of self entitlement and detachment from the real world is perfectly described by Day throughout- this is satire at its best.  But if you are hoping for a story about those elites getting their come-uppence then I’m afraid you will be reading the wrong book, for the conclusion is clear- money trumps justice every time.

There are a few negatives to this topic and the characters Day has chosen to create.  First of all, none of them are particularly likeable people.  Apart from Lucy (and I found myself irritated with her at points, particularly when she seems to simply shrug and settle in life), every other character is a total tool (I want to use stronger language to be honest).  Martin, the main protagonist, is the worst.  He is so utterly pathetic at points, so desperate to be loved, so desperate to be important and in with the ‘it’ crowd.  He puts so much importance on wealth and status, even buying ridiculously overpriced trainers simply because Ben bought a pair too.  His priorities are completely shot and it results in a character that I felt nothing but dislike and very occasional pity for.

Another issue I had was with the constant negativity of the book.  Martin in particular spends the entire book criticising and hating on other people, particularly at the party itself where there is no end of examples of loathsome people to bitch about.  It can at times make you as a reader feel cynicism taking over, but perhaps that was the point.  This negativity however is interpreted with some fantastic moments of action and these are the moments where Day utterly shines.  There is the event in Ben and Martin’s childhood where Martin took the fall for a fatal car accident, thus solidifying his place in Ben’s life, there is the ‘blow job’ scene at the party where for a moment Martin’s veil shifts and you see the real him and then there is the climax at the party which results in Martin’s interview at the Police station.  Day excels at these moments of action and it is then you see just how talented a writer she really is.

Overall, I found this book an interesting and suspenseful read and I would recommend it to anyone who fancies something thought provoking and writing with a sharp edge…think the Talented Mr Ripley or a modern Great Gatsby.  I would give it four stars out of five and definitely plan on reading more of Day’s work in the future.

Since it is Mother’s day in some parts of the world, I decided to dedicate this blog post to mothers everywhere.  I myself am a mother, to a beautiful and perfect baby girl, and I now know just how much I owe my own mum.  It is the hardest job I have ever done, and the most rewarding.  I have never been more frustrated or happy, all rolled into one ball of emotions, and I am thankful every day to have been blessed with my daughter.

I also wanted to do something a bit different, so instead of a short story, I thought I would try to write some haiku poetry for the first time.  For those of you unfamiliar with a haiku, originating from Japan, it is a three line poem which consists of five syllables, seven syllables and then five syllables again.  It sounds short and easy, but it’s harder than you think.

I decided to write one haiku as a mother and a second as a daughter.  Let me know what you think, and Happy Mother’s Day to all the mums out there!  If you feel inspired to write your own haikus then please post them in the comments section below.

I hold her closer,

Tiny hand wrapped round my thumb.

I am truly whole.