Being a bit of a nerd, I tend to gravitate towards nerdy people with similar bookish and horror loves and my geeky friends didn’t disappoint when they suggested a Stephen King book club.  It started with Pet Semetery.  The new movie was to be released soon and my friend suggested we all read the book and watch the original movie before we all visit the theatre to see the new adaptation and we enjoyed it so much, we are now reading a new Stephen King book every month and watching its screen adaptation (and also eating a ridiculous amount of snacks while we do it).  So, expect regular instalments of the King of horror on my blog in the future. 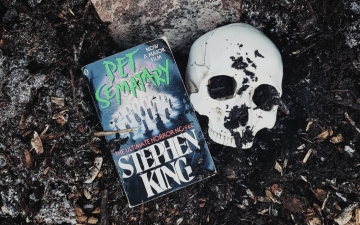 Pet Semetary follows the Creed family as they move to Ludlow, Maine for a new job and a new life.  Unbeknownst to them, their house backs onto a Pet Semetary, a harmless plot where the local children bury the many animals killed by the many, many six wheeler trucks driving through the towns main road.  But beyond there is a scared Native American burial ground, a dark place with supernatural powers and dark intentions.  When you bury your dead there, they come back to life, except the thing that returns isn’t them, it’s a shadow of who they were, a dark and twisted version of who they used to be.  When the youngest child of the Creed clan is killed on that same busy road, the toddler’s father Louis Creed decides to see what happens when a human is buried there.

I haven’t read a lot of King and it’s been years and years since I last did and this book has reignited my love and adoration of his writing.  It was in a word amazing and reminded me exactly why he is considered the King of horror.  The story is a slow burner, gradually building in tension and suspense until the violent conclusion.  It’s one of those stories when you can see exactly where it’s going, when you know it won’t end well but you still find yourself praying for a happy ending that will never come.

To be honest, I found it quite difficult to read at some points, which again is testament to King’s writing abilities.  I have a child not much older than Gage and to read the graphic details of his death, his funeral and his resurrection stirred emotions in me that cause so much anxiety and fear- what if something happened to my child?  What if she was killed?  Would I survive that?  It was tough going at times and at one point I even considered skipping those particular chapters, but I didn’t and I’m glad I didn’t because it made the horror and brutality of the ending so much more visceral.  King perfectly depicts that utter and inconsolable anguish that is only felt by a parent who has lost a child, a feeling I pray I never have to experience.  The book feeds into that fear all parents have, that something could happen to their little ones.  They could choke, they could fall, they could get sick or hit by a car and I have had those thoughts.  I have been the parent worrying about their baby.  The need to protect them and keep them safe is the most prominent and forceful need I have ever experienced and I am aware it will continue now for the rest of my life.  In that way, this book, despite being supernatural, has a horror element that is real and identifiable for so many readers such as myself.  That fear is only enhanced and fed by the other more otherworldly elements and produces some real moments of anxiety and unease in the reader.  I found myself wondering what I would have done in Louis’ place.  Would I have taken my child to that dark and unnatural place despite the warnings?  I found myself unable to answer.  I love my daughter and part of me thinks a poor imitation of her would not be the same, plus if there is a place beyond this one, surely I wouldn’t want to take her from that or force her to suffer in some way to satisfy my own selfish grief?  But there is a small part of me that relates and understands Louis Creed’s pain and grief and wonders if a tiny piece of your child is better than them being absent completely?  I know that Louis didn’t really have a choice in his decisions, with the semetary manipulating and controlling him, so the debate is slightly moot, but it’s an interesting question to ask ourselves nonetheless.

I love the references King made to his other books, talking about Jerusalem’s lot and quoting the now infamous line from The Shining, “All work and no play makes Jack a dull boy.”  I love the idea that all of his stories are all contained within one universe and it will be fun to hunt those little Easter eggs in the book club’s upcoming reads.  I find myself wondering whether Louis’ daughter Ellie has The Shining, her psychic abilities an important part of the book.  I found all of the characters to be believable and relatable, even the ones that I found irritating – I’m looking at you Rachel.  I love the books overarching theme and message relating to death.  Fearing something so inevitable is a foolish and life wasting thing to do.  Death is natural, it’s coming for all of us and on some occasions it can even be a good thing, as is repeated several times throughout the book, there are worse things than death, “Sometimes dead is better.”

My club and I found ourselves debating various elements of the book afterwards, the true sign of a really great read and I would be so interested to hear your thoughts.  We wondered whether Pascow was the first victim of the Semetary.  Louis’ colleague Steve Masterton says that this death was the start of a dark and mournful period with several people dying in quick succession afterwards and Louis himself says that everything starts to go wrong after this tragic moment.  But if that’s the case, if he was a part of the Semetary’s nefarious plans, why did Pascow’s spirit try to warn him?  Why did he reach out to Louis and Ellie?  I personally believe Pascow’s death was unrelated and the fact that Louis had tried to help him and had been there as he passed on, prompted him to try and help Louis in return.  In death he could see what was coming and he wanted to stop more death, but as a mere unrelated death and a soul which has moved on from this world, he cannot influence, he can only advise, something mentioned by Ellie towards the end of the book- he cannot interfere, he can only warn.  I do believe however that the Semetary steered Church, the Creed family cat, towards the road just as it did Gage.  My friend had another interesting perspective on Gage- that the poor little boy was always destined to die young.  After all, the kid in his two short years has had more near death experiences than Doctor Who.  He was suspected of having encephalitis, he swallows a marble, he develops a terrible bout of pneumonia and Bronchitis.  Maybe this kid was destined to die and the Semetary merely took advantage of his impending death.  Interesting thought.

Another theory batted around was that Jud, the Creed’s elderly neighbour, was kept young by the semetary as a way to ensure a new set of victims.  The fact that Jud seems younger than his years is alluded to throughout the book and indeed, the comparison of his athletic and healthy body to his arthritic ridden, sickly wife just further emphasises his own good health.  The only times he does seem a little older, is in the moments when he talks about the semetary or when he is dealing with death and towards the end of the book, as he is no longer needed since Louis has taken the cemetery’s bate, he begins to seem so much more his own age, with aches and pains described after a little gardening.

The biggest question we debated was whether the semetary wants ANYONE it can get or whether it deliberately chooses specific people.  At the end of the novel, it tempts and draws Steve Masterton only to let him go as soon as Louis and his wife’s corpse are over the deadfall. This implies to me that Steve wasn’t who it wanted, it was just a way to distract Steve until it did get what it wanted- the Creeds.  After all, Louis and Rachel’s lives have both been heavily touched and influenced by death.  Louis was raised by his undertaker Uncle, working with him at his funeral home and then later became a doctor, a person whose entire job is to battle and prevent death.  Then there is Rachel, whose sister Zelda suffered from spinal meningitis and whose tortured and painful death she had to watch, alone as a young child, something which scarred her for life and caused a deep psychological fear of all things death related.  Then there is Jud and the other locals who had buried their animals there.  The semetary didn’t come for them the same way it came for the Creeds.  It’s an interesting theory and if true I would love to know what particular traits it yearns for in its victims.

What do you guys think of my theories?  Have you got some of your own?  I would love to hear them so comment with your thoughts.

Overall, this was a suspenseful, anxious inducing and emotive read and it’s one I thoroughly recommend to any horror fan.  It is a definite five out of five from me and a book I won’t forget in a hurry.

Next up, our club will be reading Needful things, and you are welcome to join us in our King book club for a read along and watch along.  Keep an eye on my Instagram (@bookishmarie) to keep up to date with the dates of both the book club and viewing of the Needful things film.  Also, keep an eye on my blog for my next King related post which will be coming soon, this time the movie review of both the original and new adaptation of Pet Semetary and a comparison between the two.  In fact, why not subscribe so you never miss a book review, article or piece of original writing?  You know you want to…after all, life is short!!