Happy Sunday readers, I hope you had a wonderful weekend!  For tonight’s blog post, I will be reviewing Birdbox by Josh Malerman.  I think I might be the only person who hasn’t watched the Netflix original adaptation of this, but I really wanted to read the book first (plus I have a rather demanding Toddler so very limited TV time that doesn’t involve cartoon princesses and singalongs).  I will hopefully get watching it this week, but if it is even half as good as this book then I know I am in for a treat. 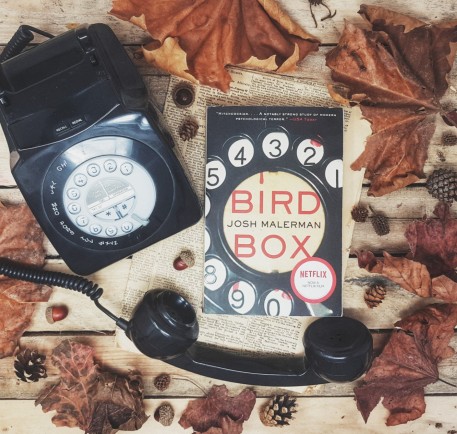 For those of you unfamiliar with Birdbox (have you been living under a rock or something?) the premise is this: A phenomenon is sweeping across the globe where people are going crazy, killing themselves and sometimes others too.  No one knows what is causing this, just that the victims always saw something before it happened. The book moves between the very pregnant Malorie and a rag tag group of survivors in the past, to the present where her and her two children battle their way upriver in the hopes of finding safety from these unknown creatures, the wild animals which have now inherited the earth from man and worse, the crazed people driven homicidally mad by what they have seen.  Sounds awesome right?

I absolutely loved this book, I really did.  The premise is fantastic, the characters are all well developed and believable and the tension and horror is very real.  I love that we as the reader never really find out what’s going on.  Are these creatures from another world or dimension?  Do they mean to cause us harm or are they inadvertently causing this carnage?  There are a few theories shared within the book, my favourite being that these creatures are so unfathomably different from ourselves that our tiny human brains simply cannot comprehend it and promptly go nuts at the slightest glimpse.  Whatever is happening, the creatures are never described which means that whatever they are is left entirely to our own imagination (in mine, they are like a creature shaped void of nothingness, walking black holes in our world, but that’s just me).  But the creatures are by no means the scariest part of this book, as it’s the reaction of the humans to the phenomena that offers the books creepiest moments.  Remember, our characters are literally blind folded, so the mere crack of a tree branch is enough to cause total panic.  Then there are the characters who are driven a different kind of mad by the creatures and the situation at large.  They don’t flip out and immediately kill themselves like most, but slowly go insane, hurting their fellow survivors.  I don’t want to have any spoilers but when things go bad, they really go South fast and it is here we see this maniacal, creepy lunacy played out in full bloody horror.

I really enjoyed the movement from past to present, it kept me hooked, maintained the tension throughout and made me desperate to find out what happened.  I had one of those ‘just one more chapter’ moments resulting in me staying up way past my bed time and suffering for it the following day (it was totally worth it though).

I love Malorie.  As a mother, I recognise that need to keep your children safe at all costs, that guttural feeling inside that says above all else, to protect.  At it’s core, this book is about survival.  It is about the good side and the bad side of humanity when faced with unimaginable horror.  It is about a mother determined to protect her children.  It is about man kind clinging to a world that is no longer theirs, refusing to lie down and give up despite insurmountable odds.  It’s pretty inspiring actually and has had me thinking at length about what I would do if, God forbid, such a thing ever happened for real.  I can’t imagine I would last too long, but I know I would do whatever I could to protect my own daughter, just like our protagonist.

It’s a slow burner, dotted with enough moments of peril and action to pull you along at a good pace to that big and bloody finale.  It’s a tense read and one that I enjoyed thoroughly.  I have to give this one full marks with five stars out of five!