Yesterday, I was travelling home on the train from a girls’ trip to Dublin when my phone began blowing up.  I opened my Twitter and Instagram to find the bookstagram community freaking out over so called “Soapgate” and I began laughing out loud like a mad woman at the many MANY hilarious tweets and puns on the Twittersphere (head over to Twitter and read through that hashtag now because some of them are hilarious…trust me, you won’t regret it).  But is this simply a joke or something more sinister?

First of all, let me caveat this post by saying I haven’t read any of the series yet, although the first book sits on my to be read pile as I type.  Also, I am not taking a side on this particular issue, I am merely asking the questions and opening the debate up because I would love to hear everyone’s take on it.

For those of you who are unfamiliar with this scandal, where on earth have you been?  Basically, a company called Bookish and Stuff who produce bookish merchandise and book boxes has found itself going viral for all of the wrong reasons.  They had produced a fan box based on the ACOTAR series by Sarah.J.Maas.  This popular series of books has spawned tonnes of fan fiction and bookish art and products, so a book box whose theme centres around the books is unsurprising, but this particular box had a twist.  The box in question is called the ‘Illyrian Book Boyfriend Box’, the Illyrians being a warrior race of Faeries featured in the series.  The box contained such items as a fan fiction book filled with saucy stories and some risqué faery based prints, but the item that got everyone talking and spawned the now viral hashtag “Soapgate” was a penis shaped soap.  Yes you read that right, a soap shaped like a penis.  I won’t feature any photos of the soap here, but a quick google search or twitter search should help you find one should you wish to see it in all of its glory.  I have seen it and it is surprisingly detailed…in fact it looks like a small sex toy complete with suction cup to stick it to your bathroom tiles (I kid you not)!

This has raised several eyebrows, along with some concerns about the soap itself and 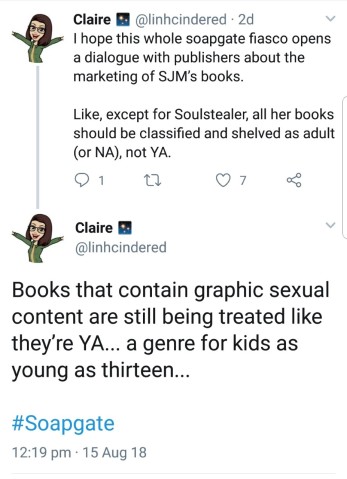 other items in the box as well.  First of all, many people, including myself, are under the impression that the ACOTAR series is Young Adult fiction, a type of fiction which targets children as young as 12 years old.  Apparently, it is in fact ‘New Adult’ which is intended for audiences around the late teens and early twenties.  Apparently, the series features some very naughty sex scenes and graphic sexual content not appropriate for younger readers.  I have seen plenty of young people featuring this book on their bookstagrams so perhaps it is reaching the wrong audiences anyway.  This has opened up a debate about the way the series has been publicised and advertised, with some people believing it wasn’t done responsibly enough by the author and publisher who should make it clearer that these books are not suitable for a young adult audience.  See this article for more on that issue. 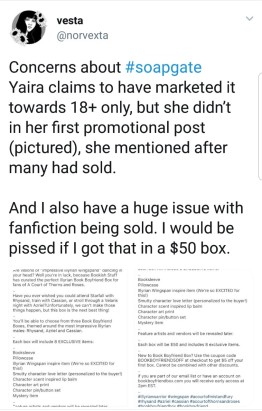 In turn, that has opened a debate about the propriety of the soap itself.  If children are reading these books, they will be buying this box or more accurately, having their parents buy them this box and I cannot imagine any parent would be too happy with that coming through the door!!  Bookish and Stuff have stated that they made it clear to customers that the book was for adults only, contained items of a sexual content and should not be purchased by or for those under 18 years of age, however I have seen several people noting online that these warnings and age restrictions only appeared after many of the boxes were already sold

Thirdly, people are angry about someone selling fan fiction and the clear copyright issues that raises.  Sarah.J.Maas worked very hard on her books so is to fair, or legal for that matter, for someone to profit from the characters and stories she created?  The many fans of this author and series don’t think so and are tweeting their outrage in abundance.

The company Bookish and Stuff have released an official statement on the soap, as follows: “We of course know the debate about what really is YA series and if ACOTAR should be YA or NA it’s an ongoing discussion, one we do not control.  However the fact that the series contains multiple graphic sex scenes remains.  Our box was advertised and sold to adults 18+, we offered multiple warnings about its not safe for work and mature sexual content.  The infamous soap should be taken as the joke it is: a literal Illyrian wingspan, it even says so on the label.  These are sold as Bachelorette joke favours in the real world.  We want to clarify that they are for external use only, as instructed on the label.  But with everything in life there will always be those that are scandalised.  If the book scandalised you, it wasn’t for you.  Most of the feedback has been positive so we are going to concentrate.” – Yaira Lynn.

Whatever your opinion, this has certainly got people talking and the book box itself is sold out!  Please comment with your opinions and attitudes on the soap itself and the issues raised as a result of it going viral, I would love to know what you guys think.  But before I sign off, I have one burning question…Why is it blue? 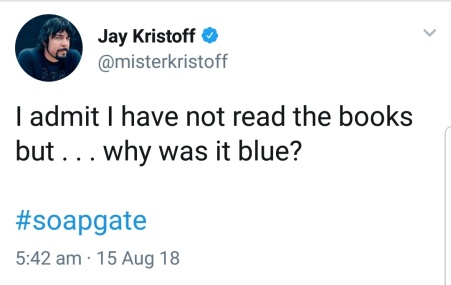