Happy Hump Day everyone!  For this blog post, I have had the honour of collaborating with the incredibly talented Mark David Tari, aka FortFrolicArt on Instagram.  I came across his page on Instagram quite by chance, and was immediately drawn to his otherworldly images.  David is  a nineteen year old graphic design student from Hungary.  He has been painting and creating art since his childhood, and began editing a few years ago.  He gets a lot of inspiration from Fantasy tales, particularly The Lord of the Rings and the Bio shock series.  For this piece, I created a short story inspired by his style and body of work, and he in turn created an image inspired by my short story.  If you like his work as much as I do, head over and follow him on Instagram, and if you are an artist who would like to collaborate with me, get in touch.  In the meantime, happy reading… 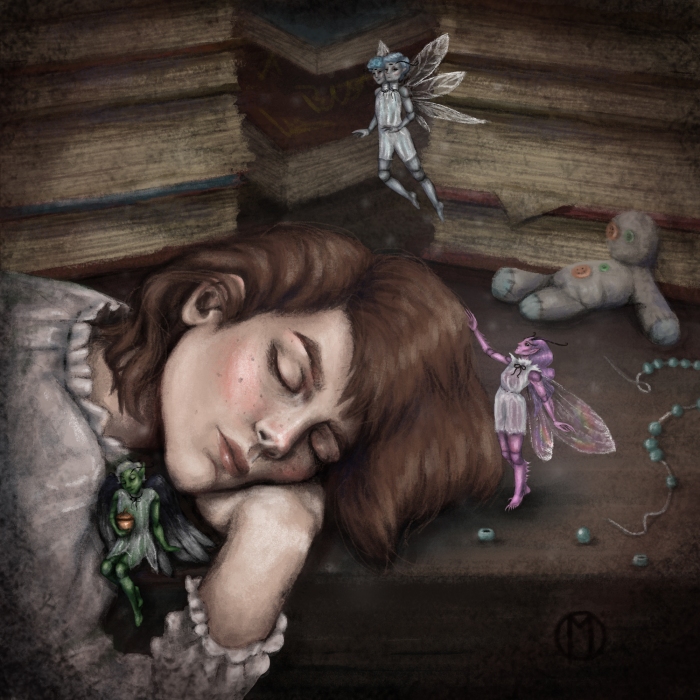 The world is like an onion, well that’s how I like to think of it anyway.  It’s built up of layers you see, layer after layer of lives and creatures and worlds within worlds…plus it stinks and it makes you cry, but that’s for another day.  Today, we discuss the layers.  I can see them all you see and move between them.  I was little when I first realised it, maybe four or five, and my mum asked me who I was talking to.  “Them.” I pointed to the space occupied by a small grey creature with two heads having an argument with itself over one of my toys. I wasn’t aware at such a young age, that Dimions, for that’s what the creature was, are in fact spoken about in the singular not plural, but I was only little, so my ignorance can be excused. “There’s no one there sweetie.” I was perplexed.  Of course, there was, I could see it with my own two eyes, a tiny human with grey skin and silver wings and it’s two heads, with three black, oval shaped eyes on each, which blinked one after the other rather than in unison.  “Them, the fairies.”  I remember the look on her face, a mixture of bemusement and concern.

I didn’t know then, that you shouldn’t tell people what you see.  If you reveal the true nature of the world to people, even if you simplify it, say with an onion analogy, they still look at you like you’re bat shit crazy.  At first, I talked to them, I played with them, I befriended them.  There is the Allgones, small and lilac with large lavender coloured wings speckled with gold.  They steal socks to sleep in, and for some reason, only ever steal one from each pair, leaving mankind scratching their heads over a pile of odd socks.  There is the Briglotts, bright pink in colour with rows and rows of tiny sharp teeth and little sharp claws.  They look like the grand prize at some terrifying fairground attraction, but in reality, they’re harmless.  They mostly eat fish and live inside hollow trees.  Then there are the Tragoys, my personal favourites.  They are dark, forest green with wings like magpie feathers. They live underground, eat earth worms and make marvellous pets.  I have one called Trillock.  That’s not her real name of course, I can’t speak her language, but that’s what it sounds like when she sneezes.  Trillock sleeps in my bed and gives me warm, earth scented cuddles in exchange for a healthy supply of worms from the local bait shop.

Trillock also has another important function…she’s my guard Tragoy.  Not all of the beings which coexist with us do so peacefully.  Some feed on the misery of human kind, and so they manipulate the world from their layer, unseen but definitely sensed.  The worst are the Dragnauts, small, black shadow like creatures who move and snake together like a murmation of starlings. Whenever one is around, they cause whichever humans are nearby, to feel sad and lost.  They emanate sorrow like a gas, and feed of our tears.  We’ve all been there haven’t we?  Those moments when we feel down for no reason at all, blaming it on hormones or drink, but it’s them.  They have a cousin, whose name I have never found out, so I call them the Ragers for that’s what they do.  They cause sporadic anger in those nearby, bringing hate and bile to the surface before gorging themselves on the rage which follows.  They look like flames, they feel like steam.

I know what you’re thinking. You think I’m nuts, cuckoo, insane in the membrane.  There’s no such thing as fairies.  They were made up as a bed time story, or a cautionary tale for children.  They are myth and legend and fiction all rolled into one.  But they’re very much real.  Children can see them and dogs and cats can see them.  They try to tell us, by pointing at nothing or barking at thin air, but we never listen.  We have a habit, us humans, of ignoring the odd and unusual, of pretending it doesn’t exist until it goes away.  I suppose, people are like onions too, layers of complicated emotions and psychological issues, it’s a wonder we’ve survived as long as we have.

Regardless of whether you believe me or not, the fairy folk exist.  They live in one of the many layers of our onion world, and they affect us and our onion lives, whether you believe they do or not.  So next time you can’t work out why you have so many odd socks or you feel sad or angry for no reason at all, you can tell them you don’t believe they’re there, and see how far that gets you.