Hello readers!  I hope you have all had a wonderful week.  Sunday nights can suck, because it means one more sleep until another full week of work, but I’m hoping my story will cheer you guys up and ease the pain of another weekend lost.

First I wanted to let you guys know what I have planned for the blog this month.  I adore autumn, and I love Halloween even more, so I have lots of awesome treats for you guys.  First of, if you are an Instgrammer, check out the photo challenge I am co-hosting on my page.  It is Halloween themed!  I will also be hosting a competition on there shortly, so keep an eye out!  Finally, I will be running a collaborative series with a very talented make up artist friend of mine, Rachel Henry.  Every week in October, we will be bringing you a blog tutorial on how to do the make up of your favourite literary horror characters, so no excuses for a bad costume this Halloween.  Now to the post…

For the latest collaborative piece, I have had the privilege of collaborating with the incredibly talented artist Lisa Reschefski.  Lisa is a visual journalist, artist and freelance illustrator who creates the most breathtaking images.  If you love the image as much as I do, you can check out more of her work on her Instagram.  Happy reading!

Ghosts are very real. They may not be literal phantasms, transparent spirits or ectoplasmic creatures who wail and float through walls, but they are, nonetheless, real. They are our past. They are our regrets and missed opportunities hanging heavy in the air. They are lost loves and forgotten friends. They are everything that we were and everything that we wish we could be. These are the ghosts which haunt our lives, and they can strike fear more easily than any spectre or ghoul.

Elise had such ghosts. They were always there, the apparitions of her past haunting her present. How could someone so young, be burdened with such regret? At just twenty years old, she should have been enjoying her life, but instead, she found herself looking past her family and friends, seeking a face in the crowd which she knew would never appear, a face long since gone from this world, the face of her beloved Richard. 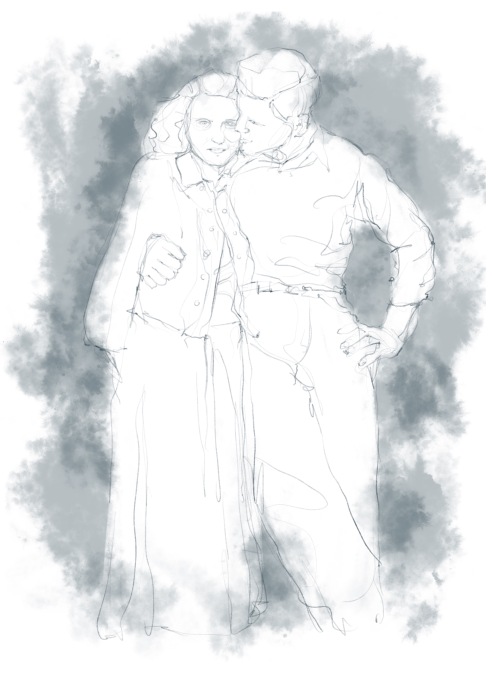 They had been childhood sweethearts. At just eight years old, he had told her, quite matter of fact, that she would be his, and from that day on, they had been inseparable. His hand had been the first hand she had held, the first lips she had kissed, the first and only man she had ever loved. They had made so many plans. They would travel, and see and do as many things as they could, and then they would marry and have a dozen children in a house built by his own hand. It was naive she supposed now, to plan a future which may never happen, to believe so strongly that love was stronger than any other power on earth. But love is not stronger than war.

There had already been a war, when she was a child. It had been called the war to end all wars, yet here they were, everyone she knew and loved, huddled around the wireless listening to the announcement. Hitler had invaded Poland. We were at war once again. Richard was of age, but he hadn’t waited for conscription. He said it was ‘his duty.’ Duty? What about her? Where was his obligation to her? They had fought for the first time, and amongst the screaming and the yelling and the tears, she had told him she would no longer be his if he left to join the fight. She swore, if he walked out that door, she would never speak to him again.

He had begged and pleaded for her to see reason, to marry him before he left, to believe in what he was doing and have faith he would return. But the idea of losing him blinded her with a terror she had never felt, and so she stood her ground, sure he would bend to her will. He left for training the next day.

She had cried every day for weeks, and every time she thought she would stop, she would receive a letter from him, telling her about his training and his new friends, and the tears would fall once more, spreading ink across the pages. He had asked her to write, but she refused. Her pride was wounded. He had chosen the army over her, he had put a uniform and a far off war ahead of their love, and she was too proud to see it from any other perspective but that of her own broken heart.

By the time she had realised her foolish arrogance, it was too late. One day, instead of a handwritten letter, she received a telegram. In a few typed words, her entire world had fallen apart. She had collapsed, unable to carry the weight of her own remorse, and for days, they could not bring her to eat or to speak. She had just lay there, awake, but asleep at the same time. The local physician was called, and he would check her pupils and pulse and place smelling salts under her nose, or shake her by the shoulders, even slapping her hard on the face. But she could not be stirred from the depths of her sorrow.

Only after her younger sister, through tear filled eyes, had pleaded with her to recover, for her family’s sake, had she come back from the brink. But she did not come back whole. Part of her had died that day, a part of her that would never heal.

Of course, the passage of time has its own healing properties. Over many years, the pain slowly lessened. She married a man. A nice man, with kind eyes and a good heart. A man she loved very much, but in a different way from Richard. It was no less worthy, no less beautiful, just different. They had three children, two girls and a boy, and a house with a white picket fence and hundreds of family photographs. They had a good marriage, and a happy life.

But Richard’s ghost never left her, not completely. She would feel his presence, when she smelled sweet pea, the first flowers he had ever brought her. She could hear his voice singing, low and melodic, when she heard certain songs. Sometimes, she thought she could feel a hand on hers or a kiss, soft as a spring breeze, caressing her cheek, appearing suddenly and disappearing just as fast. Sometimes, she even saw him, in her dreams. He would be wearing his overalls, grease stains from the cars he was helping his father fix, sweat on his brow or he would have his good suit on, the one which was handed down from his father, at least one size too big, which he wore on Sundays and special occasions. He would hold her tightly, the way he once had, and she would breathe him in deeply, savouring the mixture of oil and perspiration. Often, when she awoke, the smell would linger, that unmistakeable scent which once made her dizzy.

She was thankful, for the life she had had, for her children and her husband, all of whom she loved beyond words. She would never change the course of her life, but she couldn’t help but imagine how things may have been if he had outlived the war. She couldn’t help think, ‘what if?’ After a life filled with love and laughter, it was not a regret exactly, but her only unanswered question, her only ghost.

And so, almost fifty years to the day after Richard’s death, as she lay in the hospital bed, life slowly leaving her body, she thought of him. She was surrounded by her family, tears filling their eyes, her youngest daughter holding her hand, her husband stoic and strong for his children, wiping his eyes when they weren’t looking. She had said her I love yous, her goodbyes. She felt at peace. She felt ready. And as her pulse slowed and her breathing stopped, her final thought was of his smile, his eyes, and she hoped, that if there was another life beyond this one, if she was lucky enough to exist beyond this moment, that wherever she went, he would be there. Her Richard. Her ghost.

3 thoughts on “Ghosts: A short story and the latest in the Inspired collaborative series.”