For this part of the Inspired series, I have collaborated with a fellow lover of all things that go bump in the night, to create something which will wiggle it’s way into your nightmares.  Nick Villicana lives in sunny Los Angeles, and when he is not at his day job in retail management, he is busy writing and drawing, creating dark and twisted little creatures.  If you like Nick’s monsters as much as me, you can check out more on his Instagram.  As before, I have written a short story and sent it to Nick, who has created this amazing image.  Let me know what you think in the comments section below, and if you are a creative soul, and would like to collaborate with me, please get in touch! 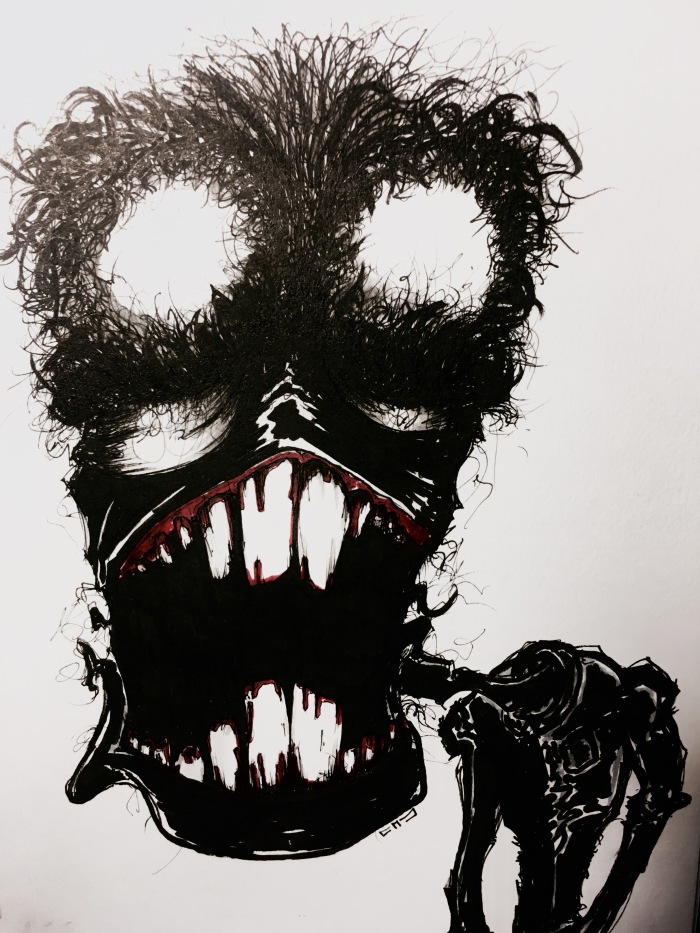 Hate is a poisonous and infectious emotion. Once it forms within our hearts, it spreads quickly, consuming us until there is nothing of who we once were; no humanity, no love, no empathy. It creates dark creatures, who wonder the earth intent on spreading the disease further. I saw it happen once, with my own eyes.

He was a student at my university, and he lived in the same halls of residence as me. When I first met him, both new to the student world, both nervous and anxious, he was shy and sweet. I liked him. He was tidier than the others who resided there, and he never stole food or brought home rowdy, drunken people or played techno music at 3am. Overall, he was a decent room mate. We never spoke that much, he kept himself to himself, but when we did he was funny and self deprecating. Then it started.

He went to a meeting, one of the many political and social groups which meet regularly within the campus, and there he met someone that planted a seed. When he returned that night, he didn’t respond to my hello, he just shuffled past into his room. I didn’t notice it in the beginning. It’s a cunning disease, which spreads slowly, subtly, so as not to provoke concern or intervention. But after a few weeks, I could see something was different, something was off.

When we spoke he was rude and cold. He would talk about things which made me uncomfortable, he labelled entire groups of people, or fellow students, as wrong, as different. He spat when he talked. I didn’t like what he said, so I avoided talking to him after that.

One night I was in my room, when I heard shouting from the communal areas of the halls. I walked down, meeting several others who had formed an audience to an argument taking place between him and another resident. They were screaming at each other. He called the girl a terrible name, so she slapped him. He spat on the floor at her feet and left the room, just as she began to tear up. I could tell they were tears of anger, not sadness. He was reported to the university after that, and given a warning. He stopped speaking to any of us.

I could hear him, inside his dark and musty dorm room for hours at a time, listening to broad casts and speeches. I don’t even think he went to class after a while, only occasionally exiting his lair to eat or take a piss. It was on one of these late night excursions, when I first saw the physical changes in him. He had become thinner, gaunt even, and he seemed taller than before. It almost looked like he had been stretched. His shoulder blades jutted out like sharp, stubby wings, and his hair had began to fall out in patches. I stopped dead when I saw him, drinking milk straight from the carton. I watched the back of his head, as milk poured down his face, pooling at his feet. When he opened the fridge door to replace the carton, it briefly illuminated him in harsh yellow light, and I could see his skin had a blue tinge to it. It was barely noticeable, almost like someone who has become suddenly cold. When he turned to leave, as the crack of light from the fridge growing smaller beside him as the door creaked shut, I could see his eyes, at least, what his eyes had become. For, they weren’t the blue eyes I had looked into before. They were milky, a white film spreading across the iris, broken up only by red snaking veins. He looked like something from a horror film. I nearly screamed as he flew past me back into his room, door slamming. I couldn’t sleep that night; every time I closed my eyes, I was staring into his.

Soon, we began to hear strange noises coming from his room. It sounded like an animal was trapped in there, something with a low deep growl. There was also a smell emanating from it, a musty smell, like damp earth and rotting leaves. We would notice clumps of hair in the bathrooms, and one day, a collection of finger nails and toe nails, not trimmings or cuttings, but whole nails, yellow and cracked with blood tinged edges. Several of the residents left after that.

I asked around, and no one had seen him for weeks. I checked his class records, and discovered he had stopped attending. I even went to one of the clubs he had joined, but he was nowhere to be seen. Concerned he may have hurt himself or worse, I decided enough was enough. I had to check on him, I had to see if he was alright. The door was unlocked when I tried the handle. I opened it slowly, the light from the hall behind me creating a line across the carpet, which grew in size, illuminating rubbish and clothes. It might have looked like any other messy dorm room, except there was pieces of rotting meat lying in piles, scattered around the floor. It looked like pork belly, except one piece had a marking on it, a tattoo of a star. I stifled my scream; he had hurt himself. But the reality was so much worse.

As the door reached it’s apex, the room illuminated by the hall light, I saw him. He was huddled on the bed at first, but he began to uncurl his body, like a centipede. No longer was he the boy I had known. He was twisted and jagged, like an insect. His arms were long now, ending around where his knees once were, and his fingers were sharp and pointed. His skin was a navy blue, and he was completely bald now. He was so tall, crouching slightly to avoid the ceiling, towering above me like some nightmare incarnate. But it was his eyes which were the worst. They were all white now, and matte, like a pearl, and they stared down at me with hatred and anger. His mouth twisted into a snarl and saliva fell as he growled and howled. I screamed and ran from the dorm. I ran until I wanted to vomit and my lungs felt like they were on fire. I ran until everything began to spin, and only then did I look back.

I could just make it out in the distance, walking out of the student’s village, a black shadow passing over the other dorms and street lights. And then, it was gone. We never saw him again after that. There were posters and TV appeals, but I knew there was nothing of him left to find. He had twisted and eroded until only hate remained. I see it everywhere now, spreading through the campus, through the country, through the world. I watch the news and see politicians giving speeches, their eyes beginning to fade white, their finger nails missing. I hear that same snarl on my radio during phone ins and debates. I smell the damp rot festering all around me, and I fear that if something isn’t done, the effects will be irreversible, and humanity will succumb, lost forever to hate.