For this part of the Inspired series, I have collaborated with the brilliant comic book artist Jorge Ibarra.  Jorge is a 29 year old architect from Santiago, Chile.  Like the heroes of the comics he loves so much, he has two lives.  By day, he designs buildings, but by night, he uses his artistic talents to produce amazing comic books.  He became interested in the world of comics, when at 6 years old, a friend gave him his old collection.  A copy of “The Amazing Spider Man” caught his eye, and the rest, as they say, is history.  Now, producing comics and illustrations, and telling stories is his passion.  I sent Jorge my story, and he was inspired to draw this amazing pop art style illustration.  If you love his art work as much as me, you can check out more of his work on Instagram @slamcomics.  Let me know what you think of Jorge’s and my work in the comments section, and if you are a creative person who would like to collaborate with me, then please get in touch!  Enjoy… 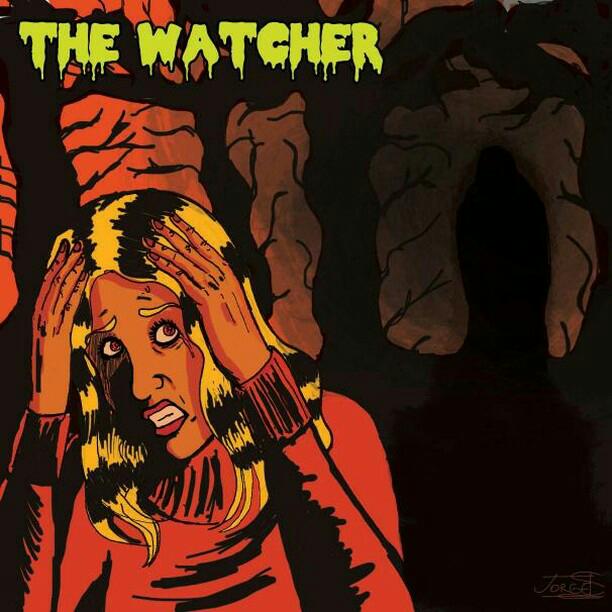 It started off as shadows. A blur in the corner of your eye, a movement which seemed to have no cause, a feeling of being watched. Over time, gradually, it manifested and formed shape, and one day, it was just there.

Sarah could remember the first time she saw it. She had been in her room, doing her history homework, when something drew her to the window. It was just standing at the other side of the street, watching her. She couldn’t make out it’s features, it was merely a silhouette, but she could tell it was staring right at her. Based on it’s build, and height, it appeared to be a man, but even that was difficult to tell. Something inside told her it wasn’t human. She hadn’t slept well that night, nor any night since.

The next day at school, she had gotten that same feeling of dread as she realised someone or something was watching her, stalking her like prey. She had searched the crowded playgrounds, but it wasn’t there. Later, as she sat in English class, she saw it standing beneath a large tree. It was always in the shadows, always just an outline. The shape of a person without features or form. A blank patch in the landscape.

As she walked home from school each day, she could hear footsteps on the sidewalk behind her, always keeping her pace, even though the street was empty of other people. She would run until she felt sick and her legs shook, but it was always there, just behind her. Those damned foot steps. Only when she reached the safety of home or school, would it show itself. The same black nothing.

Paranoia is a poisonous thing. Eventually, it spreads through all aspects of your life, tainting them, infecting them like some disease. Nowhere felt safe. No person felt trustworthy. She retreated into herself, afraid that somehow too much interaction with the outside world would bring it to her door.

Once, when she felt desperate to be free of it, she opened her window, and looking straight at it’s featureless form, she screamed, “What do you want from me?” It made no response. It did not move. It just remained there, a guard at it’s post. That night she wept. She dreamt that her shadow, once a loyal companion, began to twist and snake away from her, until it grew to become a separate, sentient entity. It changed and undulated, until it grew to form that same silhouette, that same black shadow. She awoke screaming and panting, sweat stained sheets stuck to her body, and immediately she sensed it, she knew it was there, just across the road. Standing in the same spot, in the same position. A malicious statue. Her silent watcher.

She lost her appetite, and along with it, the curved form which puberty had brought. She permanently had sunken, dark ringed eyes, and sallow skin and she started and jumped at every noise or sudden movement. A rabbit, permanently caught in headlights. Her mother begged and pleaded with her to tell her what was wrong. Was it boy trouble? Was it body image issues? What could she say? “Mum, I’m being followed by some kind of demon.” No, she knew where that path would lead to, and she wasn’t prepared to be forced into some treatment facility, along with the girls who cut themselves, or had eating disorders. Besides, she knew that it would find her wherever she went.

She agreed, after much harassment by her mother, to see a counsellor. Every Wednesday and Friday, she sat in that little brown chair opposite a sour faced woman who smelled of cinnamon candies and over pronounced every word, as she asked her how everything ‘made her feel.’ All throughout, she stared out the bay window, to the street outside, and watched the shadow watching her. Her phantom was always there when she arrived for her sessions, waiting for her. The counsellor eventually told her mother to send Sarah to a psychiatrist for therapy, and her mother struggled to hold her composure as she cursed and screamed

“What the hell was I paying you for? A fucking hair cut?”

After that, she didn’t have to visit the counsellor again. It adjusted its schedule accordingly, and appeared wherever she was, just in her peripheral vision, always in shadow. After almost a year of this, she began to self medicate, sneaking her mother’s booze at first, but eventually having the older boys buy her her own. She would drink sometimes until she passed out. Anything to obliterate it’s presence from her mind.

It was on one such occasion, that she realised it had moved closer. Not by much, a few feet maybe, but enough to be noticeable. She dismissed it as the alcohol. But the following day, inside the school classroom, she confirmed what she had seen through blurred vision. It still stood stock still, and it remained in shadow, but now she could make it out a little more clearly. She realised it was wearing some kind of suit, what colour she did not know, but she could make out the outline of a collar and cuffs. It was definitely a male, or at least, it had manifested as a male, because she could now see it was tall, perhaps six foot three, with broad shoulders, and the outline of short, spiked hair.

It remained in it’s new spot, keeping watch, for about a week before she noticed it had once again moved closer. As before, it was only a few feet closer, but now it was moving out of the cover of darkness, she could make out further detail. The suit was dark, perhaps navy or black, and it wore a tie. It had laced shoes and wore a watch on it’s left hand. Sarah felt the fear rising in her stomach. Why, after all this time, was it beginning to move? Why was it coming closer? Was it coming for her? There were so many questions swirling in her head that she felt as if her brain would burst out of her skull. The room began to move and she felt motion sick, her stomach churning and knotted. Everything swirled and blurred around her until she fell into complete darkness.

When she awoke, she was attached to a heart monitor, the solid beep beep of which was the only sound in the room. There was a drip filled with some kind of clear fluid attached to her right arm, and she felt like she had the hangover from hell. Her mother was asleep in the corner, awkwardly positioned on a plastic chair. As the fog cleared, she turned her head to take in the rest of the room.

That’s when she saw it. Standing behind the white plastic curtain, she could make out the clear outline of it, standing as it always did, but now, it was so close, she could almost reach out and touch it. She wanted to scream out, to cry for help, but she could not move, she could not run. It was as if an invisible force held her to the bed, and all she could manage was to squeeze out a solitary tear as the form before her began to melt and ooze into a black liquid, a puddle forming beneath the curtain. Slowly, she felt a coldness grip her body, making it’s way from her feet to her head, spreading through every cell, snaking through every vein. She willed her mother to wake from her slumber, to sense something was wrong, and come to her aid. But it was too late. After less than a minute, the black had entombed her.

It was like being underwater. She could hear her own shallow breathing, and the pounding of her heart beat inside her head, and then she began to feel the water rushing away. As she lay motionless, the world around her began to disappear. She felt herself begin to break apart, and flow away too, atom by atom. She imagined this is what water felt, as it was evaporated into the atmosphere. She began to forget things, memories of her childhood, her first crush, her own name. It was if she was being shown a still of each moment of her fifteen years on earth, before it was snatched away and lost forever. Within moments, she remembered almost nothing at all, and whoever she was, or had been, she knew she was dying. And then, she was gone.

When her mother awoke, she discovered Sarah’s bed empty. The drip needle, lay on the bed, and the clear fluid had left a small wet patch where it had continued to serve its purpose. She had screamed for help, hysterical at the thought that her daughter had run away, or perhaps even worse, been stolen from beneath her nose. There had been a search of the hospital and grounds. There had been police called and search and rescue called and eventually even coast guards called. There had been television appeals by her crying mother, and posters printed. Her high school prom picture now wall papered most of the town, and her face was better known to the local people than most celebrities. But despite the dogs, and the helicopters and the prayers and tears, Sarah was never seen or heard from again. She had simply vanished.

Robert sat at his computer, staring at the calculations on the lap top opposite him, desperately searching his brain for the answers. College had been harder to adjust to than he had thought, and despite his attempts to reinvent himself, he was still very much the outsider. When he began to question why he had chosen physics as his major, something inside him stirred. He suddenly had the overwhelming feeling he was being watched. He looked around him, and confirmed that the library was indeed empty. After all, it was 3am, and most students were either passed out from too much drink, or still partying. But something drew him towards the large stained glass window opposite him.

He walked up, and got so close to the glass, that his breathe misted it, turning the dark royal blue, momentarily paler. Through the glass he could just make out the figure of someone. It looked like a girl, based on the height and build, and the slight outline of long hair, but it was hard to tell. He couldn’t take his eyes of it. His gut told him something was very wrong. That this thing wasn’t human, that it was here for him. He didn’t sleep well that night, nor any night since.